After spending a massive day taking in all the excitement of Sideshow Alley and the Outdoor Children’s Carnival (see my blog on that experience here), I was very keen to sit back ring-side and watch the EkkaNITES action unfold in the Main Arena as part of my most recent trip to the 2016 Ekka.

From Sheep Dog demonstrations to the Trots to the swinging axes of the Woodchop Champions, the evening got off to a traditional and terrific start.

Then it was time to mix it up, with the Ride and Drive QLD v NSW event seeing two forms of horsepower on display – two riders completing a horse jump race before literally running to two Ute to perform a handbrake turn in the dirt to race back and tag their partner, who then did the same. Everyone knows how much Queensland loves a state of origin battle, so I wasn’t surprised to hear the crowd going wild as they cheered on their side!

The RACQ LifeFlight Helicopter then lit up the faces of children all around the arena, even performing a mock rescue as a perfect precursor to the upcoming stunts. 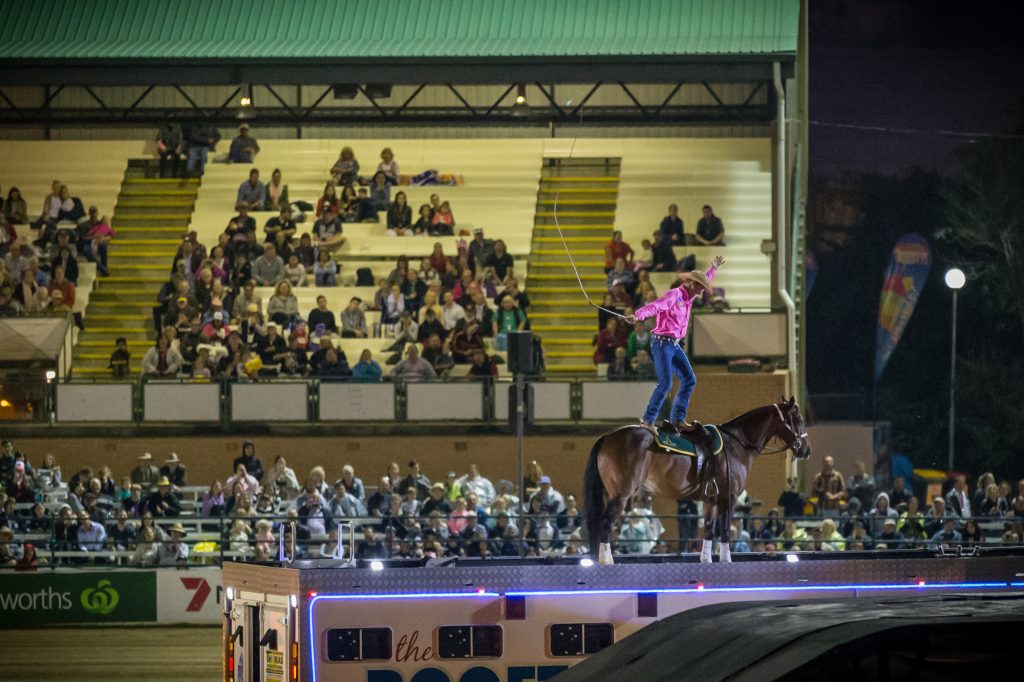 Imagine this – a rooftop trailer travels around the outside of the arena at speed. A galloping cowgirl appears, performing tricks and stunts on her horse before leaping from it onto the side of the trailer and climbing onto the roof. How exciting, how dangerous, how fast! A cowboy then tries the same – and we all wait with baited breath to see who takes out bragging rights with the quickest time. Known as the Lone Ranger Stunt, this portion of the show is new for 2016 and sure had all of us enthralled as it played out.

Soon to come was the Hot Wheels High Octane Show, but there was something else to come before the pink and blue Hot Wheels drift utes, Queensland’s own Renee Gracie and nine year old Madz Mingay on his very own custom-built mini Trophy Truck hit the Arena. Thanks to the Penny Farthing Historical Club – in their first ever appearance at EkkaNITES – the audience were treated to a ride back in time with the Penny Farthing Race. 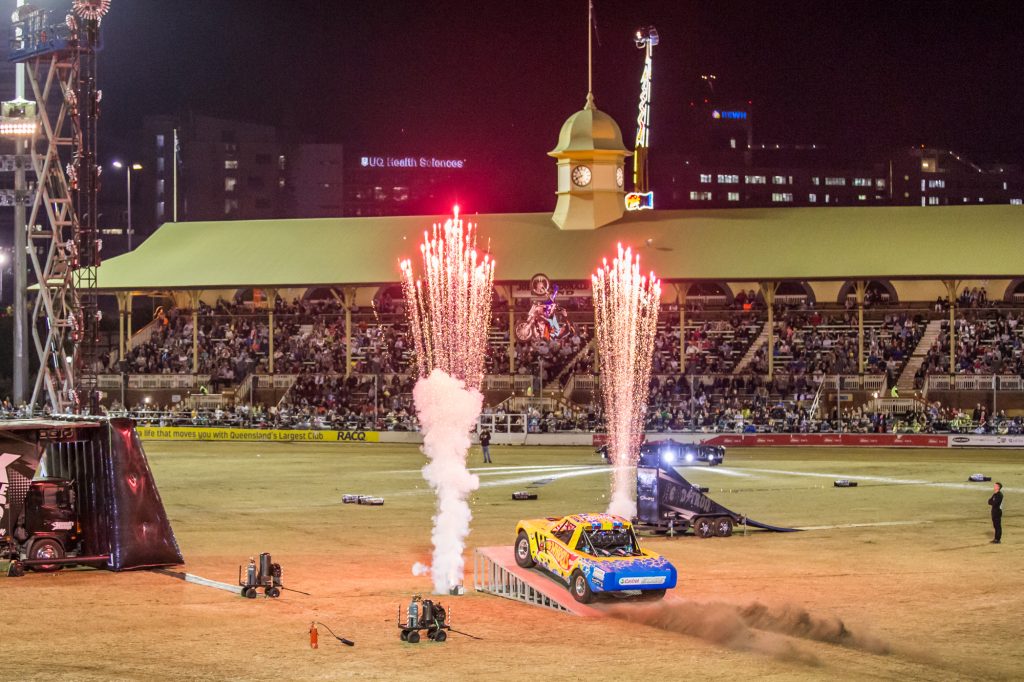 When it came to adrenalin, the Hot Wheelers weren’t the only ones keeping it at a high either – the FMX Freestyle Kings, International American FMX superstar Vicki Golden, and The Sphere of Death all had everyone on tenterhooks, as did the Go Girls ‘Sci-Fleet Toyota MX Racing Divas’, the flame-throwing Jet Van and Billy Burn Out.

There was also plenty of music – the national anthem was delivered by the internationally acclaimed Guruman Dancers, with electric violinist Brandon Woods performing and Emily Wurramara providing vocals. Also taking part in the anthem each night are the Queensland Police Service, including the state’s first female police highway patrol motorbike riders along with squad cars and Mounted Police horses.

A tribute to Aussie Music followed with the songs of Cold Chisel, Keith Urban and Kylie Minogue with Farren Jones (X-Factor), Carter Roser and Neridah Leishman performing with the backing of a live band to the delight of the crowd across the night.

Also part of the show were the Heroes of the Outback – a first-class arena spectacular show featuring world-first horse and cattle stunts and true blue Aussie comedy – as well as trick riding superstar Mikayla Jade, and everyone’s favourite puppet Agro. 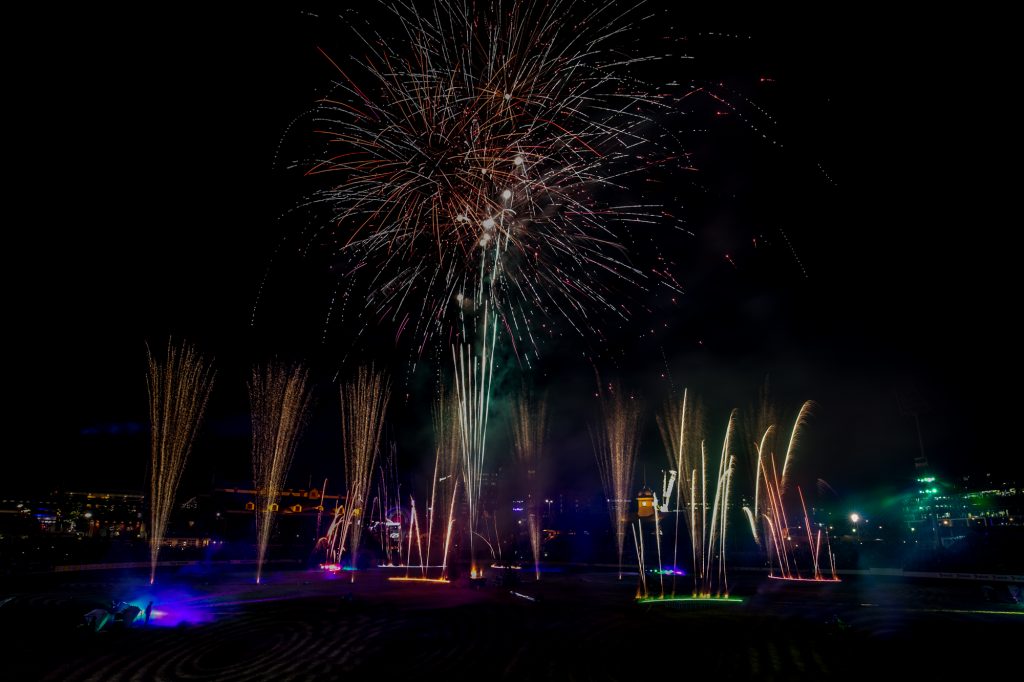 And of course, it wouldn’t be a night at the Ekka without the Fireworks – a breathtaking finale features a Pyrotechnic Tower never before seen in Australia this year, with fireworks fired from 49 positions on the 24 metre tower to create a Bellagio fountain effect shooting sideways, inwards and skywards. It was just amazing, and wow did it provide some amazing photographic opportunities for me!

Taking it to the next level were quad motorcycles towing 20 kites with silver fountain fireworks, while six illuminated horses galloped around the arena changing colours before the crowd’s eyes. The audience doesn’t miss a second of the action either, with the 360 degree show design allowing them to have an equal experience from any spot.

That might sound like a lot, but I still don’t feel like I have even scratched the surface of what it is really like to be ring-side and taking in all the sights, sounds, smells and excitement of the EkkaNITES program – I really can’t encourage you enough to check it out yourself.