I was one of a lucky contingent treated to the official relaunch of Nonna’s Restaurant on the northern Gold Coast this week, and what a treat.

Opened in May of 2005, the restaurant is a Harbour Town staple but recently underwent a $1 million renovation under the watchful eyes of brothers (and owners) Sacha, Ben and Damien Kanaghines.

So keen were they to get the new-look restaurant underway for their customers, the brothers – with the help of their “amazing builder” – pushed the eight week build through in just 23 days to be ready to relaunch this week with not only revitalised surroundings, but also a new menu, new logo, new uniforms – new everything! 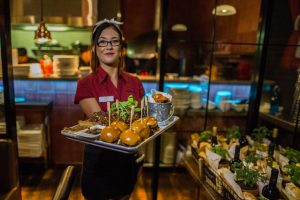 While having the chance to feast my lens on the new sights – both in furnishings and delectable eats – I was also given the opportunity to feast my taste buds on the new menu and even got to create my own Insane Shake which was certainly a lot of fun.

Co-owner Sacha told me that the new menu and look reflects exactly what the brothers’ customers want after an extensive period of feedback and market research.

“We did lots of feedback and lots of market research asking people what they wanted, and they wanted that organic, free range offering. They wanted fresh fruit, fresh vegetables, fresh meats, organic poultry and dairy and so on,” said Sacha.

Damien further explained in a speech he gave to the attendees.

“We have gone with really fresh and using as much organic and local produce as we can, the best ingredients and so on to make a complete dining experience, and on top of that we wanted to make it as fun as possible, and really theatrical,” said Kanaghines.

With three feet high Fairy Floss towers, 1 foot high Insane Shakes, one-metre pizzas from an authentic imported Italian rotating wood fire pizza oven, a Parilla South American fire grill, a bursting and varied menu, amazing furnishings and the chance to watch the kitchen in full force (without the noise) thanks to glass walling – in my opinion, the brothers have nailed that combination. 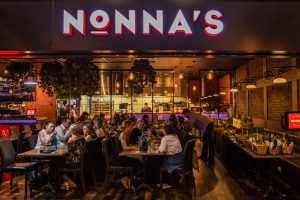