Rapisarda Autosport International will be seeking redemption at the ANDRA Nationals at Calder Park Raceway this weekend after finishing second, third and fifth at the Santos Summer Thunder meeting at Sydney Dragway.

Wayne Newby was the best performer for RAI finishing runner-up to Mildura racer Darren Morgan in the final. Last round winner, Damien Harris, went down to Aaron Hambridge in the battle for the third and fourth place.

American import, Dom Lagana, finished fifth and produced the finest run of the meeting with a 4.62/523 km/h pass to claim low et and top speed honors. 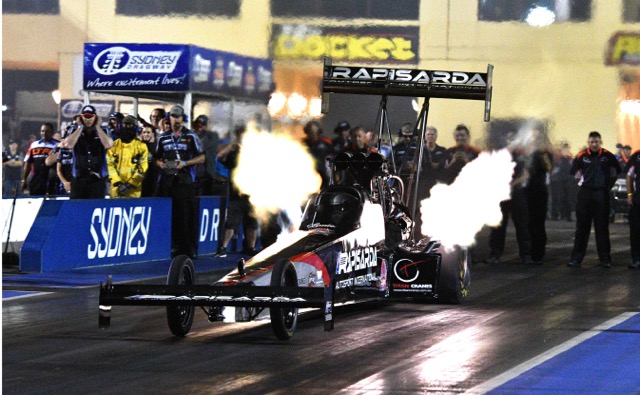 “I’ve been racing long enough to know you can’t win them all,” said team owner Santo Rapisarda. “Today wasn’t our day. The day belonged to Darren Morgan because he produced the goods when it counted.”

At the half way mark of the six round 400 Thunder series, Newby leads the championship with 222 points from Morgan on 215 points and Harris 40 markers adrift in third place.

Lagana, chasing his first Top Fuel win in Oz, said: “The car was trying to run around the 4.60 and 520 km/h mark all day. It was hot out there and at the end of the day we were finally able to back the car down.”

“I’m looking forward to running at Calder Park,” said Lagana. “It’s one on the most historic tracks in the country. I think you will see an improved performance from all three RAI cars. We had some bugs out there in Sydney and I have no doubt our tuning trio Santino, Junior and Lee Beard will get on top of the issues. Coming back to running 1000 foot, instead of the normal quarter-mile distance, should make little if any difference to how the cars will be set up. What it does mean is that reaction times will be critical. Damien and Wayne are two of the best Top Fuel racers in Australia when the lights turn green. A seven-day turnaround between Sydney and Calder is a challenge, but our plan is to go out there and put on a show for the fans in Victoria.