“We wanted to win the title on the track and not rely on Larry to beat Wayne in the final,” explained Harris. “But, what’s most important is the Rapisarda family have taken both titles up for grab this weekend.” 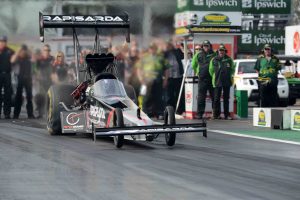 Santino Rapisarda, tuner on the Newby car, was characteristically up-beat despite missing out on winning both the 400 Thunder title and Winternationals crown. “The track got cold before the final and we just couldn’t get the car to stick. At the end of the day what mattered is that a Rapisarda car won. That’s what counts.”

“It’s so much fun to come to Willowbank and run on this great race track for Santo and the Rapisarda family,” said Lee Beard, who also won the 2015 Winternationals for RAI with Cory McClenathan. “The track really cooled down before the final and we knew it was going to be tricky to get down under those conditions.”

A last minute change to the race day format saw RAI stars Dixon and Newby handed solo runs in first round and Harris easily accounted for rising star Peter Xiberras to set up a monster semi-final battle with the three-time NHRA champion Dixon.

The highlight of the Winternationals meet without question was the epic semi-final round where Harris and Dixon etched their names into the history book with the fastest side by side pass ever witnessed in Australia. Harris stopped the timers with a breathtaking speed of 336.99 mph and Dixon recording a speed of 332.92 mph. “The team gave Damien an awesome race car,” said crew chief Santo Rapisarda Jr. “To loose was disappointing but it’s some consolation to run the fastest speed in Australia and the second fastest in the world ever behind American legend Tony Schumacher who clocked 337.58 mph at Brainerd Minnesota in 2005. It showed how happy the engine was and how much power we are making. Damien and the crew did their job, nothing fell off and you can only run those speeds when you have a great crew.” 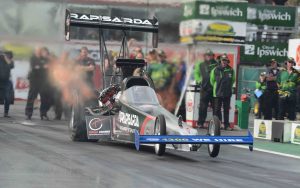 In the other half of the draw Newby lead all the way to secure his spot in the final against Dixon with a comfortable 4.55/325 mph win over the highly fancied Darren Morgan. The team then was forced to “borrow” the rear wing from the Harris car when eagle- eyed crew member, Allie Newby, noticed a crack in the wing when their car returned to the pits.
In the final Dixon lead all the way to claim his maiden Oz Winter title with a 4.91/257 mph against Newby who crossed the line at 11.37/81.95 mph.